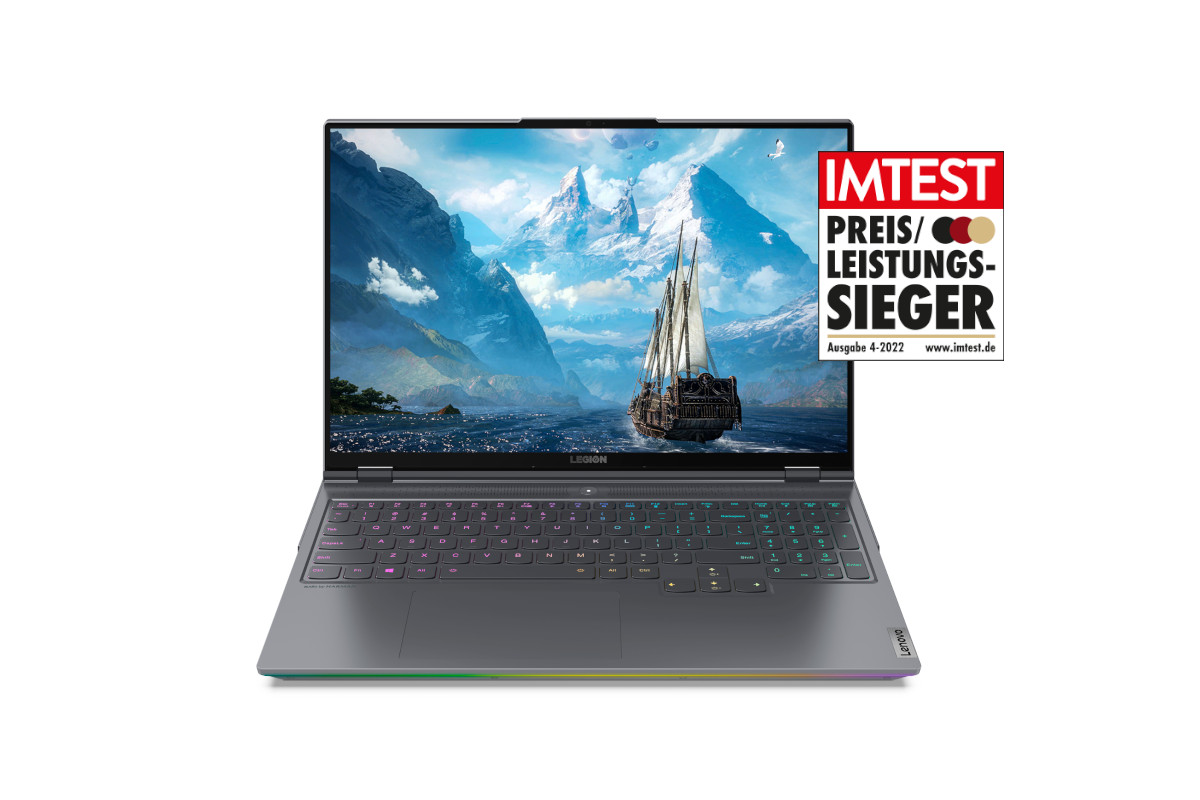 At first it seems unusual, then the fun begins: The Lenovo Legion 7 with a 16-inch screen in 16:10 portrait format literally draws you into virtual worlds. Thanks to the fast GeForce 3070, games also run very smoothly. You can read below how the gaming notebook is doing otherwise.

While some manufacturers of gaming notebooks used obtrusive rainbow lighting in the past, Lenovo is taking a different approach with the Legion series: A no-frills design in a high-quality aluminum case, which could easily pass as a classy office laptop. The big brother of the Lenovo Legion 7 Slim has a little less RAM, but a noticeably faster GeForce 3070 graphics card and a 1 TB hard drive that is generously dimensioned for gamers. And very important: underbody lighting!

There is a lot of computing power in the case, which, in addition to office tasks, can also cope with complex programs such as video editing and image editing: The 8-core processor from AMD is supported by a sufficiently dimensioned 16 GB memory and a 1 TB hard drive. IMTEST reveals how well the 16-inch device with underbody lighting performs in the test.

Specifications of the Lenovo Legion 7

The Lenovo Legion 7 from the test comes with the following specifications and components:

Lenovo Legion 7 in review: Are the workmanship and connections convincing?

At 2.5 kg, it is one of the somewhat heavier representatives of the gaming notebooks, but it can shine with its top aluminum workmanship. It looks like a professional office laptop at first, but once the underbody lights and the small glowing Y on the back glow, there’s no doubt: now it’s time for high-resolution games like GTA V or Cyberpunk 2077.

The connectivity of the Lenovo Legion 7 can already be seen on the housing: The device offers five fast USB ports (2x USB A, 3x USB-C), an HDMI 2.1 output for connecting to a 4K television with up to 120 Hz, the obligatory SD card reader as well as outputs for network cables and audio. It doesn’t get any better than that.

Particularly practical: the connections on the back are identified by illuminated lettering from above. This simplifies the connection of the HDMI television or USB devices without annoying fiddling and without lifting the notebook.

Lenovo Legion 7 in the test: Precise keyboard for gaming pleasure

The Lenovo’s keyboard is easy to use: As with its little brother, the Slim 7, the 1.6 cm wide keys are easy to hit and have a short, crisp pressure point. This is especially important for games. Although the 14-centimetre touchpad is large and precise, it is only suitable for a few strategy games in which quick action is not important – experienced gamers use the gaming mouse anyway.

Gaming performance of the Legion 7: More than 140 watts provide steam

The GeForce 3070 graphics card is installed in the most powerful version, which is fed with over 140 watts from the power supply. In Full HD games, for example, it achieves a very smooth 86 frames per second at the highest level of detail. But it wasn’t quite enough for 4K. It jerks a bit with maximum details at 38 frames per second. For a smooth display from 60 frames per second, players therefore have to lower the game’s quality settings slightly. The games or programs from the test are listed below with the values ​​achieved in each case:

Despite the enormous performance in Lenovo’s Legion 7, the device only gets unobtrusively loud: It reached 46 decibels under full load, which was noticeable in the form of a slight whirring, but never really disturbed. Especially when music or a game soundtrack was playing, the noise was lost in the background noise. With normal office work or surfing, on the other hand, it was hardly audible at 38 decibels.

Lenovo Legion 7 on the test bench: storage and network

The Legion 7 has a lavishly dimensioned hard drive with a capacity of 1 terabyte (1,000 GB). Even several large games like Grand Theft Auto V with 80 GB or Cyberpunk 2077 with 70 GB find enough space here. The speed is okay for notebooks: With around three gigabytes per second, the hard drive reads and writes very quickly.

Open your notebook and immerse yourself in 3D game worlds? This is only possible with these 5 gaming notebooks.

The test programs used, such as 3DMark Storage, show how quickly the Lenovo Legion 7 loads various levels of complex games such as Borderlands, Call of Duty and Overwatch. The values ​​are good, but cannot keep up with full-fledged gaming computers: These achieve transfer speeds that are twice as high.

The WLAN receiver is a bit more sluggish: Even under ideal conditions, it only achieves 292 Mbit per second. Some competing models can do that better. It’s faster with 810 Mbit via the LAN connection directly to the router – this ensures more speed and fewer dropouts, which is particularly important for multiplayer titles like Fortnite.

The 16-inch screen in the upright 16:10 format shines with a very high brightness of over 500 cd/m2, which is also sufficient for gaming sessions in the garden. The contrast ratio of 1,251:1 and the color fidelity are also on a good level – they don’t look quite true to the original for professional image editing, but they are completely sufficient for games. The screen reaches up to 165 Hz and thus offers buttery smooth playback.

The enormous performance requirements when gaming have a negative impact on the battery life: The Lenovo Legion 7 ran out of air after just 1 hour and 21 minutes. However, if you only surf on the couch or work with Office, you can stay mobile for almost 3 ½ hours on the go. That’s not much, which is why it’s only enough for the grade 4 here.

The overall package is right with Lenovo: A bright screen, a fast GeForce 3070, a 1 TB hard drive in a classy case and – don’t forget – the underbody lighting – for only 1,799 euros. There is hardly a better game package. In addition, the 16:10 screen offers a better gaming experience overall. At IMTEST, the model was also the price-performance winner in a comparison with four other gaming notebooks.

Register now for the IMTEST newsletter for free!

Our best news, guides and purchase advice of the week for you by e-mail and free of charge.