Phantom cars and serial killers in the new Halloween event 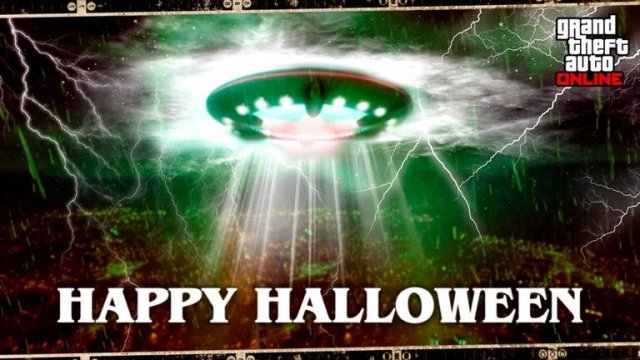 10/22/2021 at 6:41 p.m
from Oliver Jaeger –
Rockstar Games launches the Halloween event for GTA Online. Alongside UFOs, self-driving cars, and slashers running around, there are returning Halloween modes including Slasher, Come Out to Play, and Condemned. In addition, other perks and rewards await the players.

Halloween is just around the corner – the perfect opportunity for Rockstar Games to announce the Halloween Event in GTA Online. The developer studio has come up with interesting things. UFOs are said to be visible in the sky, phantom cars driving around without a driver and serial killers up to mischief in Los Santos. Also returning are three Halloween modes, each offering double GTA$ and reputation. These are « Slasher », « Come Out to Play » and « Condemned ».

Not only in the three Halloween modes is there everything to win twice, but also in other areas such as survival battles with aliens or in competitive battles in which the aim is to capture cargo and also unlock sunglasses and a green glow stick chain can.

New clothes can also be scavenged, more precisely, two T-shirts. On the one hand there is the « Twilight Blade » t-shirt as a reward for taking out an attacking slasher. On the other hand, GTA 3 celebrates its 20th anniversary on October 22nd, so a free GTA 3 baseball bat t-shirt is provided by Rockstar Games.

In addition, there is the new Camhedz slot machine in the arcade, the « Republican Space Rangers » design for the Pfister Comet S2, the Dinka RT3000 as a prize vehicle in the LS Car Meet, three test vehicles on the test track in the LS Car Meet, the Peyote Gasser as the week’s top prize on the Wheel of Fortune and a 30 percent discount on the Casino Penthouse with associated adjustments and improvements.

Vehicle discounts should not be missing from the Halloween event either. Discounts of either 30, 40 or 50 percent apply to selected vehicles. All Prime gamers can also look forward to 100,000 GTA dollars and a free motorbike. There is also a 70 percent discount on two additional vehicles.

Jump to the comments (3)